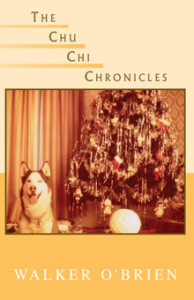 In the interest of providing adventure for the younger reader, Walker O’Brien has written The Chu-Chi Chronicles.  A three story novel (3 separate stories in the book).

The Chu-Chi Chronicles: Chu Chi and his sled dog pals live in central Canada, have big adventures AND can talk. They treat their humans as you might expect and each story has a lesson and a moral, but…mostly it’s just fun.

Chu Chi is a handsome, powerful, and brave Siberian Husky. But, he didn’t start out that way. The Chu Chi Chronicles is a collection of stories about Chu Chi and his pals who live in the Canadian village of Reindeer Lake. In the first three stories, we join Chu Chi and his friends as they engage in a series of adventures, as they explore their world. Encounters with polar bears, jewel thieves, and a beautiful show dog who steals Chu Chi’s heart, are a few of the many special moments to be found in these stories. From the beginning of the Great Race, the reader is rooting for Chu Chi’s team to win the prize. It’s a spot on the Royal Mounties, Olympic Sled team. When our hapless group attends their first dog show, chaos erupts when they discover a jewel robbery and eventually solve the crime. And, as the intrepid team of dogs, attempt a dangerous rescue on Christmas Eve, in the midst of a blinding blizzard, “supernatural” events guide the outcome and give us all a gentle reminder of what is truly important. The Chu Chi Chronicles blend tales of adventure with messages of wisdom and hope. They are the kinds of stories many of us read as children, but The Chu Chi Chronicles include a decidedly modern touch. These adventures can be read again and again and then passed on to the next generation. They are ideal for younger readers, but have a message for everyone. W.O. 2001

Or get it on Amazon